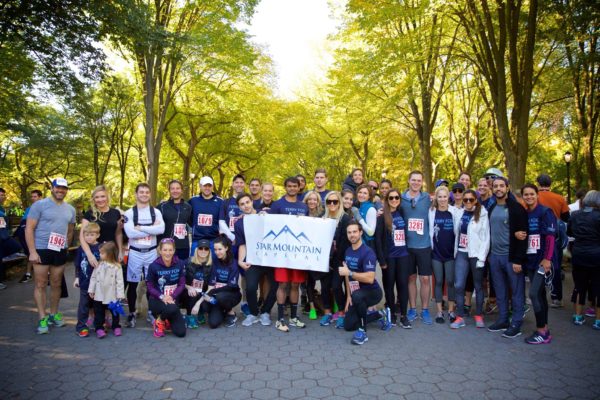 NEW YORK–Star Mountain Capital, LLC (“Star Mountain”), a specialized investment manager focused exclusively on the large and underserved U.S. lower middle-market of private business that generally have between $10 million and $150 million in annual revenues, is pleased to announce their participation and continued efforts in supporting the Terry Fox Foundation at the annual Terry Fox Run for Cancer Research in New York City. Team Star Mountain Capital had been named the #1 fundraising team for the past two years and was among the top fundraisers again for this year’s run. Star Mountain has raised approximately $150,000 for the Terry Fox Run over the years as part of its broader efforts to help raise money and awareness for cancer prevention and treatment with 100% of the proceeds going directly to Memorial Sloan Kettering Cancer Center.

“I lost my mother at the age of six to cancer, which is why events like the Terry Fox Run are so important to me. It’s also great for our corporate culture as it gets the team thinking about being healthier as they gear up for a fun run with colleagues and friends,” said Brett Hickey, Founder & CEO of Star Mountain Capital and Star Mountain Charitable Foundation. “Culture is a core part of the DNA at Star Mountain and I am proud that we have been able to help make a difference and inspire others.”

“Continued support from Star Mountain Capital has been critical to our work in the development of novel therapies for leukemias and lymphomas. This work has already changed the lives of many patients,” said Dr. Renier J. Brentjens, Medical Oncologist at Memorial Sloan Kettering Cancer Center.

The Terry Fox Run is a non-competitive walk/run where people get together to raise money for cancer research in memory of Terry Fox. Terry was only 18 years old when he was diagnosed with osteogenic sarcoma (bone cancer) and forced to have his right leg amputated. While in the hospital, Terry was so overcome by the suffering of other cancer patients that he decided to run across Canada to raise money for cancer research. He would call his journey the Marathon of Hope; running 143 days and 5,373 kilometers (3,339 miles).

To date, there are Terry Fox runs in more than 20 countries around the world and the Terry Fox Foundation has raised over $750 million for cancer research.

“Brett’s personal support of the run and the dedication of the Star Mountain Capital team to the cause of raising funds for cancer research is very important to the run and is a testament to Brett’s leadership and the culture of the Star Mountain organization,” said Ken Ottenbreit, Founder of the Terry Fox Run in New York City and former President of the Canadian Association of New York (CANY).

Thank you to Four Seasons for sponsoring the event and to all the participants and donors for making this year’s Terry Fox run a great success. We look forward to seeing you again next year.

Investing in the Growth Engine of America ® – Star Mountain Capital is a specialized asset management firm focused on investing in the large and underserved U.S. lower middle-market of companies with typically between $10 million and $150 million of annual revenues. Star Mountain’s distinctive business includes a custom-built media and technology platform and brings proven, large market resources to smaller businesses as a value-added lender and investment partner.

As part of its ESG, Star Mountain’s Charitable Foundation, a not-for-profit 501(c)3 focuses on improving lives through economic development, including job creation, health & wellness and cancer research. Notable missions include helping match veterans and women with high quality small and medium-sized business career opportunities across the country, including within Star Mountain’s portfolio which in aggregate represents over 200 companies.

Star Mountain was named one of the 2017 Best Places to Work by Crain’s New York Business.